In this post, my mom is going to give her take on our time in India after I give mine.

On the first day my mom had a field class so me and dad were to explore alone. We went outside the port to have people who wanted to give us a Tuk Tuk tour swarm us. We gave up and let a guy take us. We paid him 2 dollars to give us a tour of Cochin with in 4 hours. We first went to our hotel to play a little bit and then he showed us markets, beaches, spice shops, churches, and other local shops. I got 2 pairs of Elephant pants made. Dad did all the shopping and got Aladdin pants. We visited a catholic place and learned about religion. We then met mom back at the ship and caught each other up on the day.

[Mom’s take: I had a great day in Cochin with my Adolescent Psychology class. We visited Union Christian College—which is almost 100 years old—and spent the day with the psychology faculty and graduate and undergraduate students who study Psychology at the College. We were greeted by the students and faculty (7 faculty and 27 students) and then taken on a tour of the campus. We then had a delicious lunch together in a room where there was a large round table that accommodated all of my students (28 in total) and the UC College students on the inside of the table. This format was perfect for ice-breaking and within minutes all the students were laughing and talking, taking selfies together, and sharing contact and social media information. It was great! The point of our visit was to talk about love, dating, and marriage in India, which has many arranged marriages and so to facilitate this discussion we all watched a Bollywood movie called 2 States together. It was about two college students in India from two different states who fell in love and wanted to marry and how they went about trying to convince their families to let this happen. It was a great movie for facilitating our discussion. After the movie we spoke in small groups about these topics and then as a larger group. It was a terrific trip and my class and I continued to talk about our time and all that we learned on our bus ride back to the ship. I met up with Rob and Maxx in the dining room on the ship and we ate dinner together and shared stories of our day.]

The next day we went to the airport and flew to New Delhi where we took another cooking class but with a local named Jyoti. We made chicken and spices. It was OK.

[Mom’s take: The cooking class was awesome! It might have been a little technical for Maxx, who came hungry and was starving, but Rob and I enjoyed it very much (even though it became clear that Rob was to watch and I was to ‘learn’—traditional roles die hard 😉 Jyoti was great and ended up showing Maxx the television room where he watched cartoons while we made a ton of different things and learned many Indian cooking techniques. We learned to make: Chai tea; tomato onion puree (masala); green chutney; tikki with peas; cauliflower in masala sauce; saag paneer (as well as how to make paneer—fresh cheese); rice pulao; tandoori chicken; and butter chicken! And, of course, the best part was getting to eat all our yummy dishes. Maxx did try a few things that we made but ended up eating more of Jyoti’s homemade carrot cake than anything else ;)]

The third day we celebrated Holi with a local family and their community. We got hit by water/water balloons, had colored dust blind us, shoot and put color on us, and dance. It was a fun catastrophe. Not much happened so sadly that was all.

[Mom’s take: This was a terrific day and one we will remember forever. We got to celebrate the festival of Holi with a local family. They live in a community where everyone works for the same Government-run educational society, which provides free housing for its employees. Every household in this community had someone working for this society as either a professor or a teacher or a curriculum developer or some educational role. The society develops curriculum for use in all of India at the Society-run schools. We were welcomed into the home of Amit, who runs a tour company in India, and his mother, Kavita, who works for the society. After a little chit chat we started the Holi celebration by going into the temple in their home (every home in India has its own temple where prayer and worship occur to the many, many gods) and giving offerings of flowers and colors to the gods. We then had some snacks and headed out to the home of friends who were hosting the Holi celebration this year. Holi is a celebration of spring—moving from winter to summer—and colors and childlike abandon play a big role. Children and adults alike smear colored powder on each other, saying “Happy Holi” and the children drop water balloons and shoot colored water out of water guns. There is music and dancing and most everyone partakes of a special drink made from yogurt (and which also contains a derivative of the cannabis plant). We were warmly welcomes by everyone in this community and no one would let us just stand still…Rob and I got dragged into a circle of dance, and color smearing, and joviality that lasted for hours. We had a great time. Many, many photos were taken (this was the first time they had foreigners celebrating Holi with them 🙂 and lots of videos of our less-than-smooth dance moves 🙂 We then went back to Kavita’s home to have lunch and chat a bit more with Amit and his sister and brother-in-law and their 6-year-old daughter, who could not leave Maxx alone and who dragged him out for some more mischief in the neighborhood involving water balloons. After lunch we returned to our hotel covered from head to toe in colors. A great day!!]

The next day we rode in a snack–filled vehicle to Agra and visited the Agra Fort and Taj Mahal at night. We had a lot of fun watching the monkeys run loose and have 10000 pictures taken. We then went to sleep with visions of tourists taking photos in our heads.

[Mom’s take: Yep, the van that our driver picked us up in to take us to Agra was filled with more snacks that you can imagine. Rob sat up front and Maxx and I sat in the back with a big basket of tons of goodies between us….needless to say, we did our best all the way to Agra 🙂 Maxx left out the terrific lunch we had at a local restaurant—probably because he ate French fries—which was super yummy. The Agra Fort was a masterpiece of architecture, and that was the 30% that is open to the public…the remaining 70% is still used by the Indian Army. After the Fort, our guide took us to the rear gardens of the Taj Mahal, which provided an awesome view of the Taj Mahal by sunset. It was lovely…except for the bugs and mosquitoes that came out at that time 🙂 On our way back to the hotel, we stopped to see how the artisans make marble inlay. This is a painstaking process where small pieces of different gemstones are hand carved and then laid into hand-chiseled designs carved into Indian marble. The same family that built the Taj Mahal still does this artistry and the secret formula for the glue—which holds the pieces in place and NEVER lets go, even 400+ years later—is not told to anyone but the sons in the family. All natural ingredients are used and the glue holds like nothing else. The daughters are not told the secret because, in India, when a woman gets married she then becomes a part of the husband’s family and this is too risky for the secret formula getting out!]

We woke up at 3:30 AM to watch my cousin’s wedding live streamed on Facebook. (Congratulations Jessica and Jake!!!). We then slept for 45 mins and woke up at 5:30 to immediately get moving to get to the Taj for sunrise. We took 1000000000000 pictures and saw the tombs inside. We then drove home to get packed and go to Cochin.

[Mom’s take: This was an early morning but we were so happy to have my niece get married while we were in port and able to join remotely via livestream 🙂 It was a wonderful ceremony on the dock near our homes in FishHawk with lots of friends and family celebrating Jessica and Jake 🙂 Then, the Taj Mahal by sunrise was also wonderful. We did take a lot of photos but it was a once in a lifetime experience so that’s ok. The Taj Mahal is one of the 7 wonders of the world and what a wonder it is. It was built by the Mughal emperor Shah Jahan for his favorite wife (she was this third), Mumtaz Mahal, who died giving birth to their 14th child and who made him promise on her deathbed to (a) never marry again, and (b) to built her a beautiful building in paradise to house her tomb. Both her and Shah Jahan’s tombs are in the Taj (well, actually underneath) but there are replicas on display in the building. It’s built out of Indian marble and is simply an architectural miracle that took 22 years to build (from 1632-1653). While at the Taj we met up with a few of my students all beautifully dressed in their new sarees, who wanted to take a photo with Maxx…see below…Maxx is a hit with the college students 🙂 Then we made the long trek back to Cochin…]

[Mom again: Our time in India was really amazing. Lots of great food, great people, and great experiences 🙂 There are lots of people here…nearly 1.3 Billion, second only to China and so I was expecting to be overwhelmed but everyone was very kind and warm and welcoming and so this made our experience one that we will truly cherish.]

P.S. I have been a little sick for most and probably the whole trip so sorry for the short post. I’ve had difficulty thinking so forgive me on these posts. 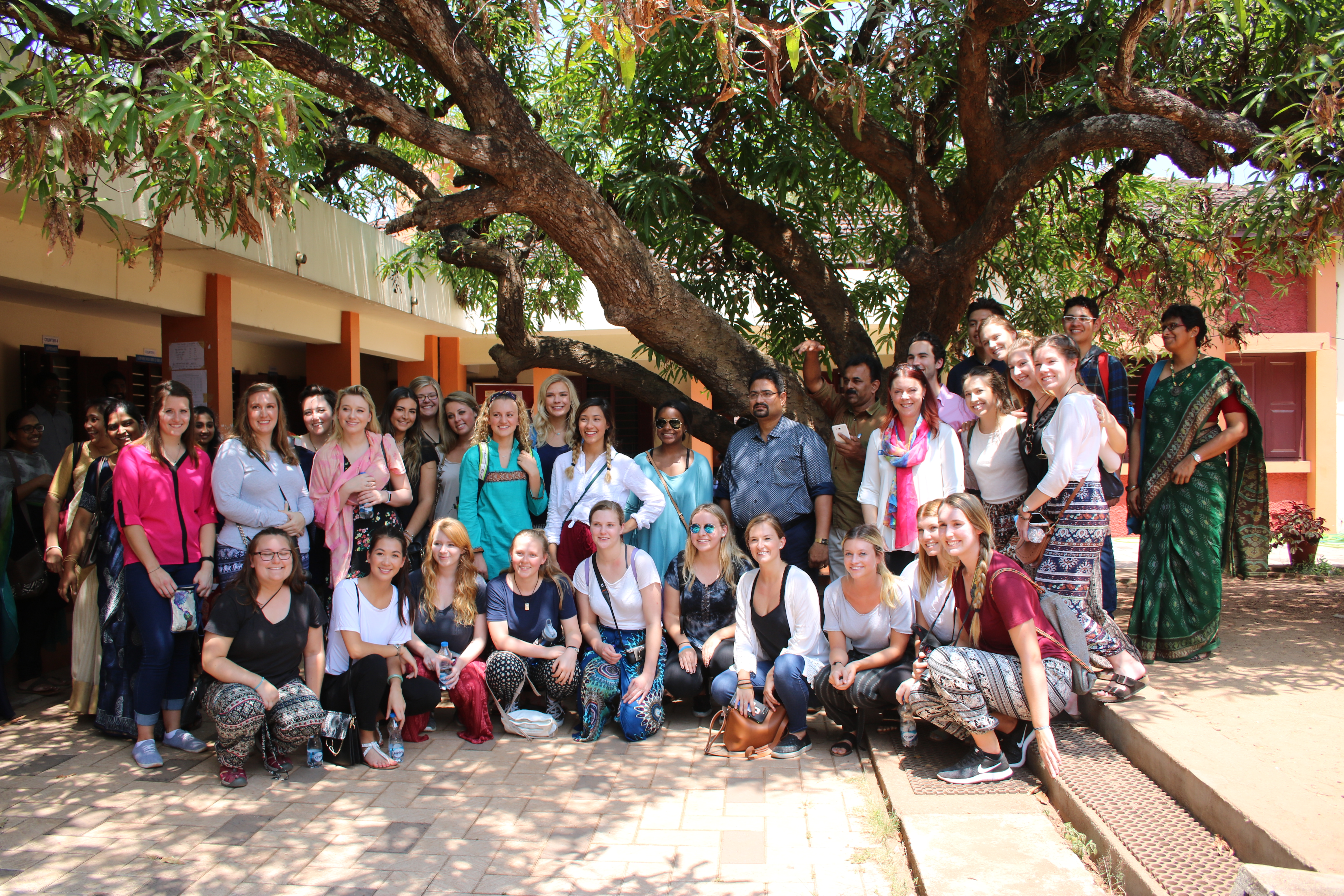 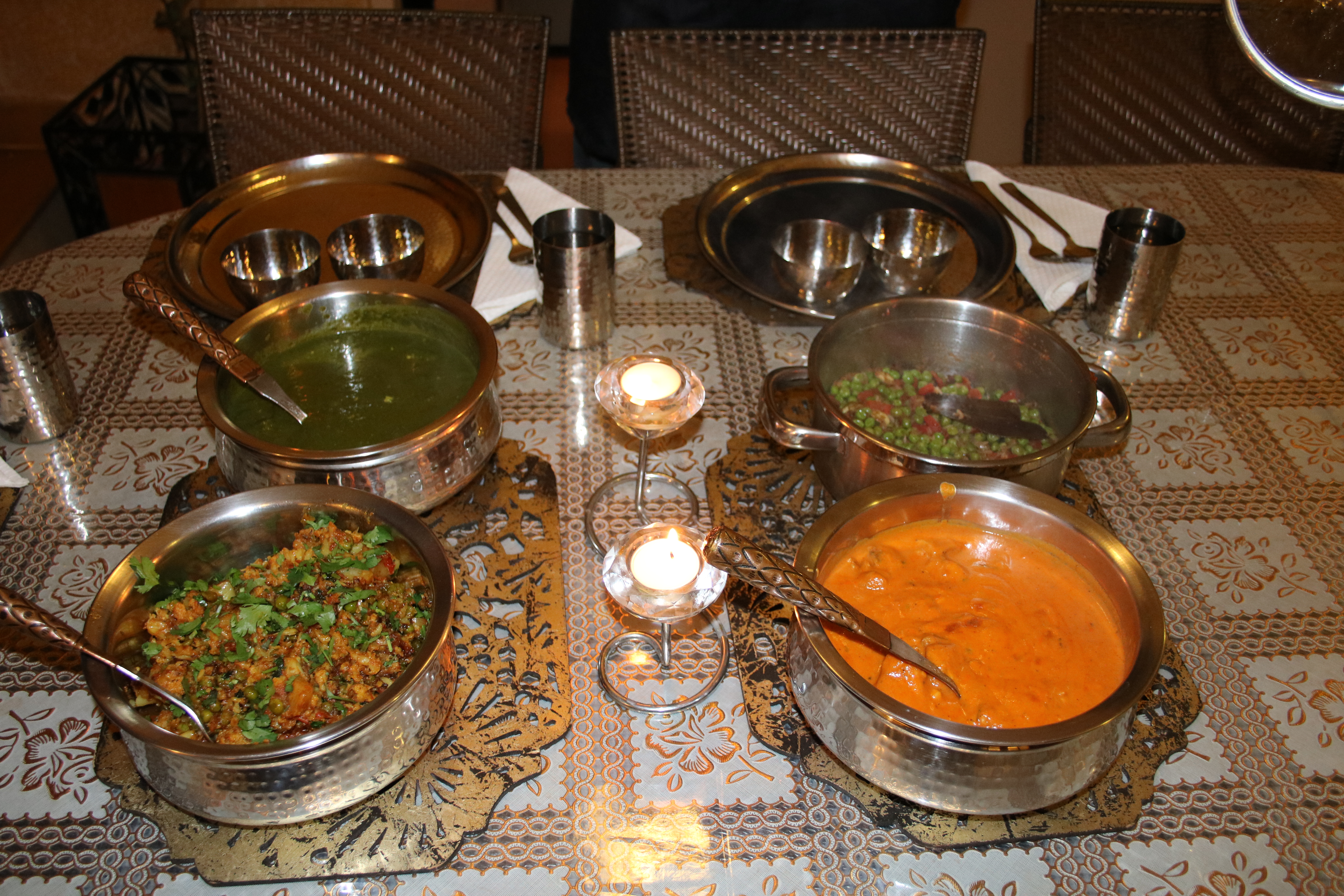 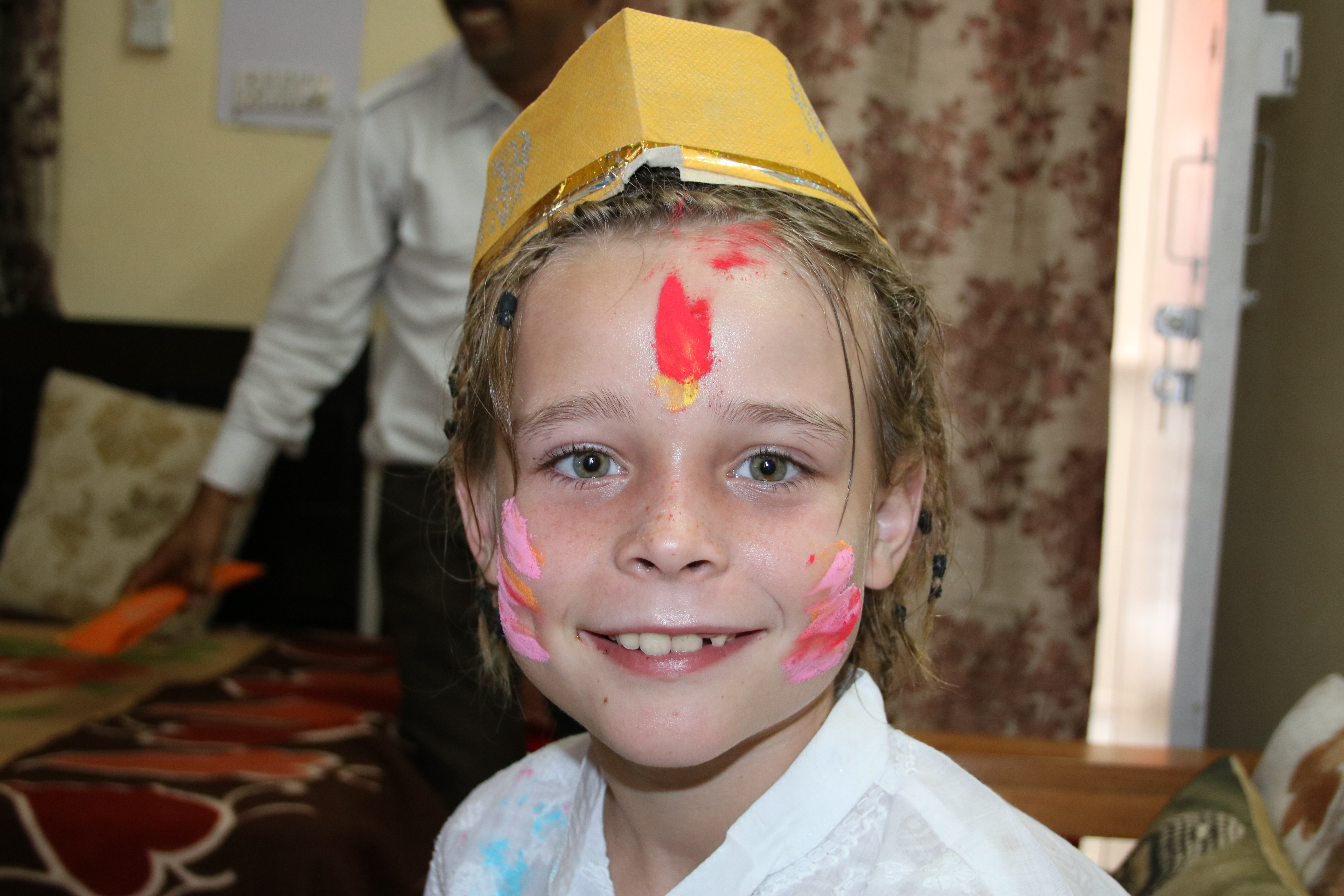 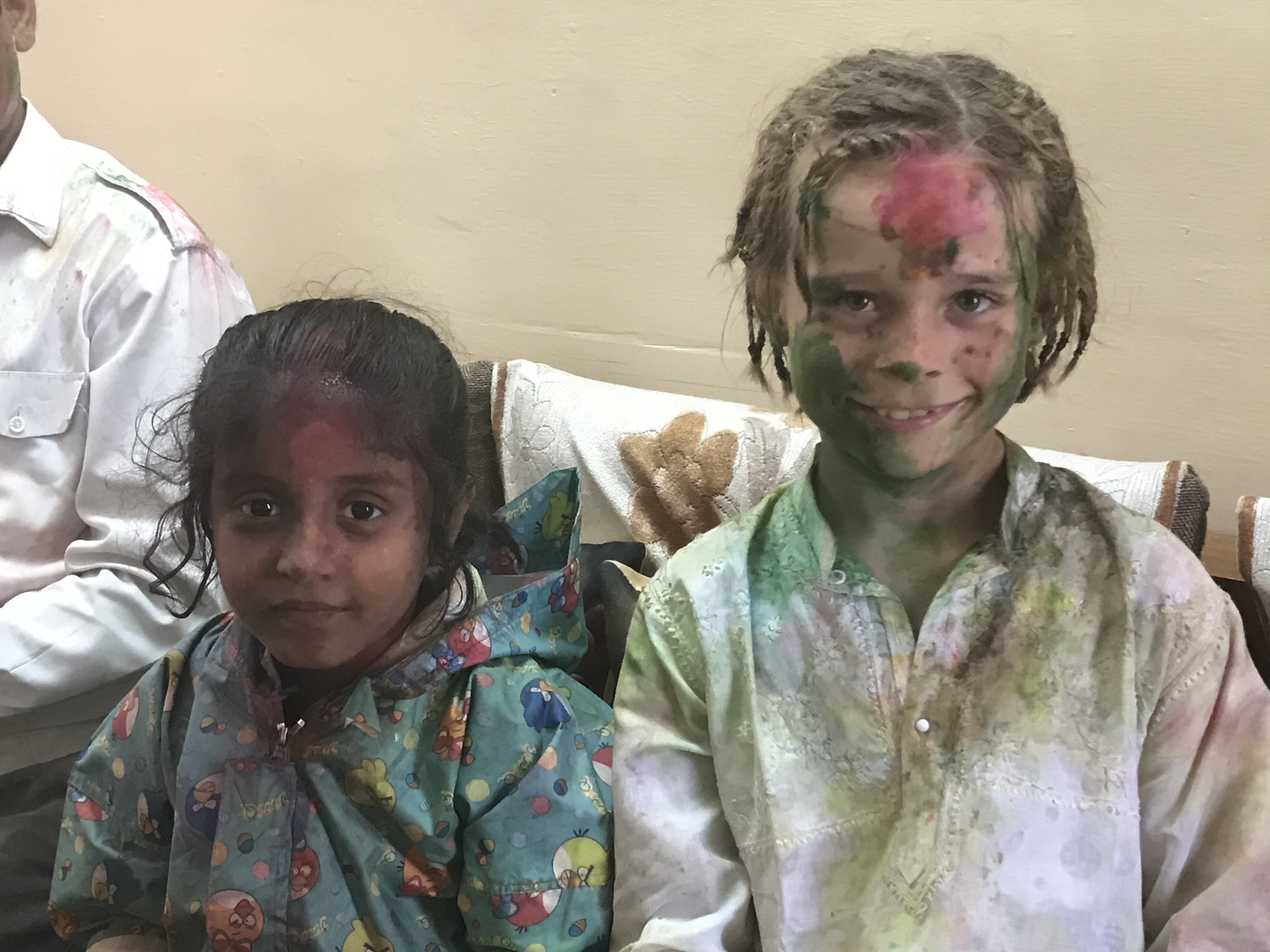 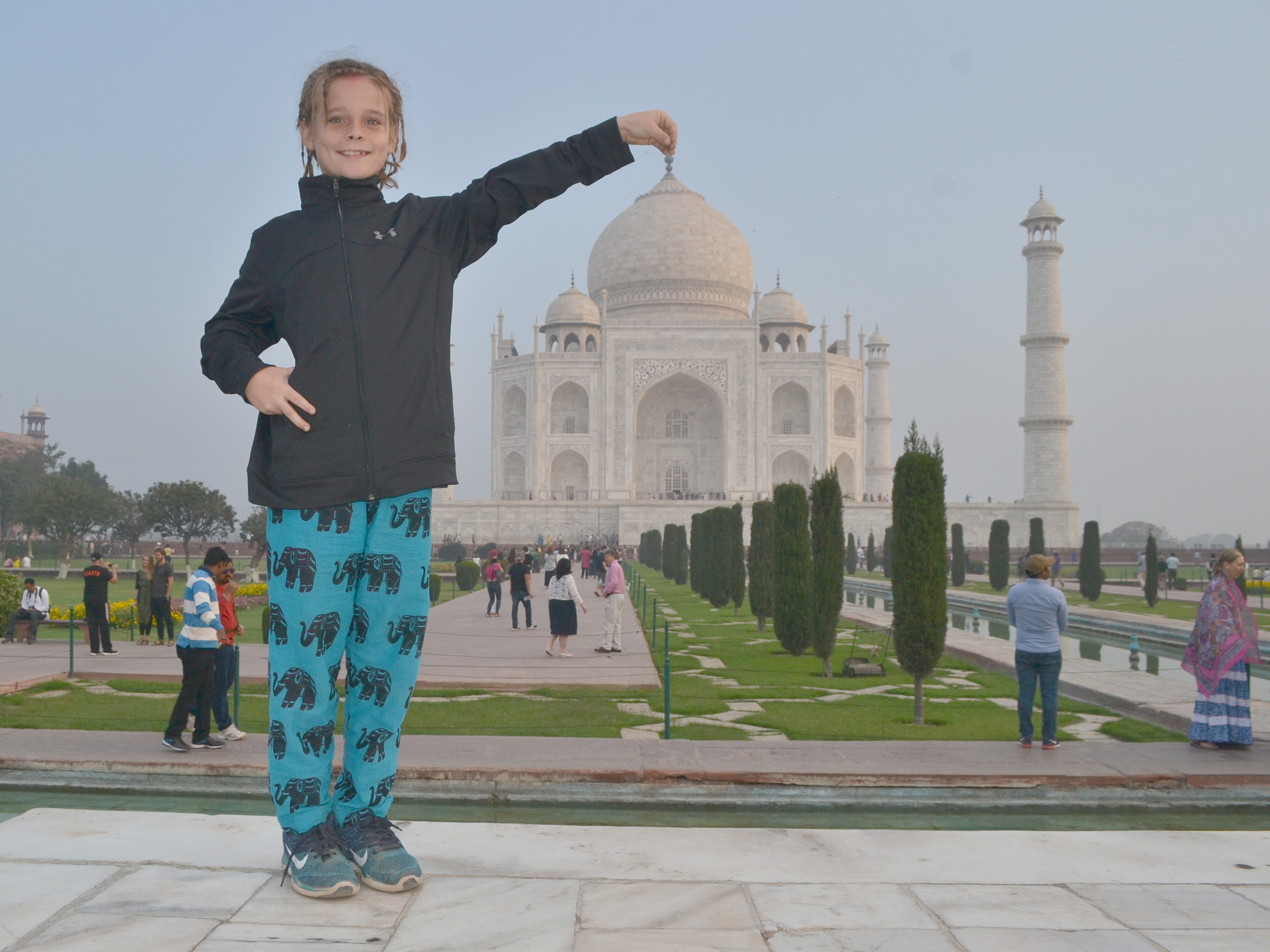 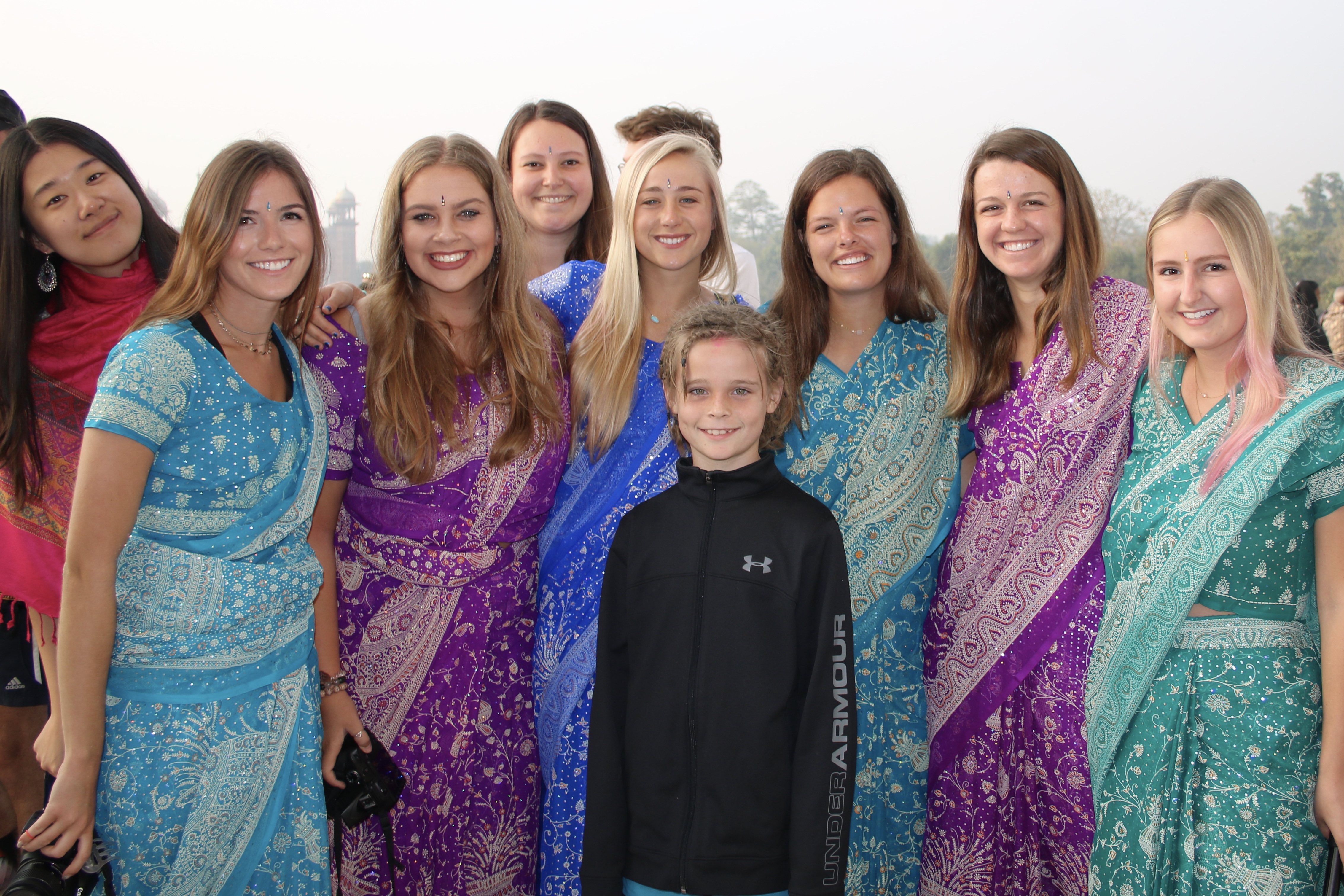